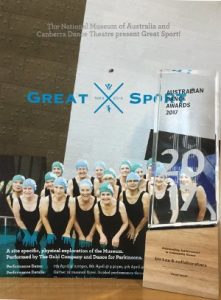 Great Sport! was presented at the National Museum of Australia in 2016 as the final work of CDT’s then Artistic Director Liz Lea. Congratulations to Liz Lea; Philip Piggin, Jane Ingall; the other choreographers; and all the GOLD and Dance for Parkinson’s performers who made this wonderful event possible. The Trophy was awarded to ‘Liz Lea and Collaborators’. Our congratulations also go to separate shortlistings to QL2 Dance for Outstanding Achievement in Youth Dance, and a personal shortlisting of Philip Piggin for Services to Dance. Philip is also a teacher at CDT and is based at Belconnen Arts Centre.

Great Sport! was made possible by the generous support of the National Museum of Australia and was produced by Canberra Dance Theatre with funding from ACT Health Promotion Grants and ArtsACT Project Funding, with additional support from Parkinson’s ACT and Belconnen and Tuggeranong Arts Centres. The project was auspiced by Ausdance ACT and CDT acknowledged the generous support of the National Film and Sound Archive. 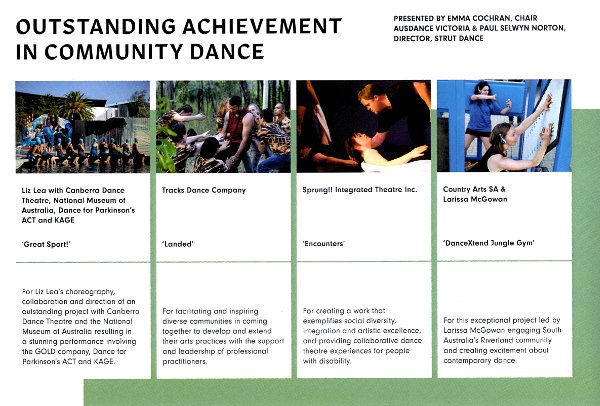