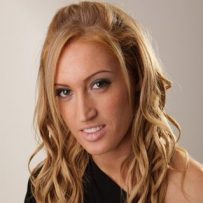 Elle holds a Certificate IV in Commercial Dance and Musical Theatre, Certificate III in Fitness and Acro Dance Certification. Elle has danced internationally completing contracts in Singapore and New Zealand. Her television credits include appearances on the AFL Grand Final Show (Channel 9), Bogan Pride (SBS), Good Friday Appeal (Channel 7) and as a featured instructor and presenter on Donna Aston’s Fitness To Go DVD. Some of her live performance credits include performing as a solo aerialist for the Black Eyed Peas, various shows at Crown Casino and cheerleader for the Melbourne Storm. She has worked in administration and management roles in creative, production and entertainment businesses. Since 2014, Elle has been the Director and Principal of Dazzle Dance Academy. Elle adores the community spirit that has fostered amongst the families of the Academy and is passionate about providing quality dance education and building self-confidence in local rural kids. In addition to being a studio owner, Elle also serves as Secretary of Board for Ausdance ACT.

This message is only visible to site admins
Problem displaying Facebook posts.